The working principle of the Atomic Force Microscope (AFM) is based on the forces that arise when a sample surface is scanned with a nanometer-sized tip (a few to 10s of nm) attached to a cantilever.

The advancement of the AFM over traditional stylus surface profilers is that the former uses a feedback loop to control the forces between the surface and probe. Because the forces are controlled, very small probes may be used, and not broken while capturing an image.

AFMWorkshop products all include 5 standard modes. There are two primary modes used for measuring the topography of a sample, which are contact mode and vibrating mode. Lateral Force and Phase modes offer surface material contrast. Finally Force-Distance(F/D) curves meausre the interaction forces between a probe and surface.

In this mode, a probe at the end of a cantilever is vibrated up and down. As the vibrating probe begins to interact with a surface, the vibration amplitude is dampened. The amount of damping is proportional to the amount of force placed on the surface by the probe on each oscillation of the vibrating probe. A feedback loop is used to maintain a fixed vibration amplitude as the probe is scanned across a surface. Forces between the probe and surface in vibrating mode can be as low as a few 10's of piconewtons.

A phase difference between oscillation of the cantilever and of the signal that drives cantilever oscillation (for example, piezoelectric crystal) is measured and visualized in phase imaging.i There is no phase contrast when the surface is homogenous, or when there is no interaction between the tip and surface (i.e., the cantilever is well above the surface). However, if specific regions of the surface have distinct mechanical properties, that could be captured with phase imaging. This is because cantilever loses a different amount of energy as probe taps to surface areas with differing mechanical properties. Hence, phase imaging could be helpful to detect variations in mechanical properties such as friction, adhesion, and viscoelasticity on surfaces. It could as well be used to detect patterns of various materials such as polymers on the surface or to identify contaminants that can not be distinguished with topography imaging.

In lateral force or frictional force microscopy, lateral deflections of the cantilever, arising due to forces parallel to the plane of the sample surface such as friction force, are measured.i This allows detecting inhomogeneities on the material which gives rise to variations in surface friction. 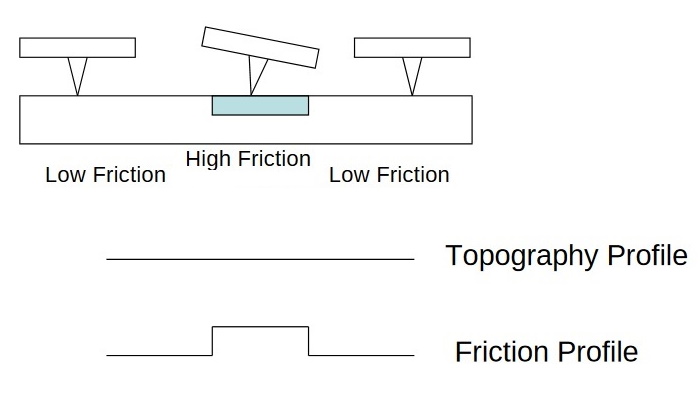 This figure shows the view of a cantilever from the front. As the probe mounted at the end of a cantilever scans across a surface, if there are regions of differing friction, the cantilever will rotate. The rotation is measured with a photodetector. 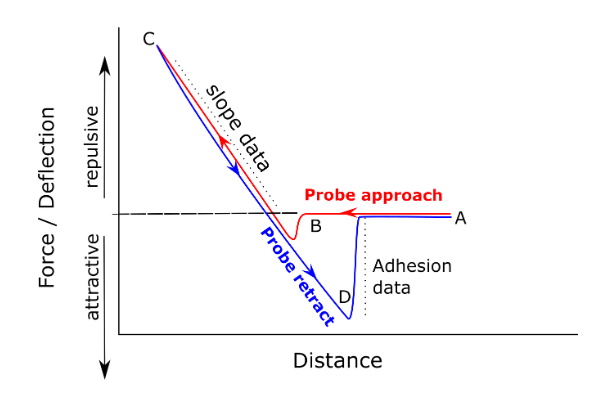